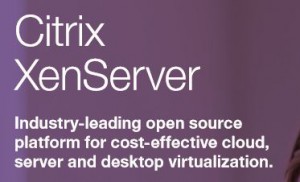 Why use VMWare for all of your virtual workloads? You can have the best of breed of both. Use VMWare for critical Infrastructure workloads where performance and high availability are paramount. Then make huge hypervisor licensing savings by using XenXerver for stateless desktop knowledge workers (where criticality is not so important when you have safety in numbers).

Some important new features in XenServer 6.5 represent a very competitive alternative to VMWare as XenServer is now truly 64bit and contains enhanced support for GPU virtualization.

With architectural improvements, XenServer now supports the latest NVIDIA GRID cards and more physical GPUs per host, increasing vGPU session scalability by 50% (from 64 VMs to 96 VMs). The XenServer hypervisor management platform is able to effectively scale as the hardware grows.

XenServer has always had a 64-bit heart, being based on the Xen hypervisor (a Linux Foundation project).  It has also long supported both 32-bit and 64-bit guest operating systems, although the control domain (Dom0) was previously 32-bit.  In this release, XenServer v6.5 now ships with a 64-bit control domain, which has a profound impact to the host.

No longer constrained to 32-bit OS limitations, the XenServer control domain is now able to directly access far more memory (RAM) and address more PCIe adapters than before.  Both of these enhancements increase the scalability and performance of the overall system, and enable XenServer to support the latest generation of 64-bit server hardware from OEMs.

XenServer 6.5 re-introduces workload balancing (WLB) and support for workload monitoring and reporting. This gives system administrators deep insight into system performance, allowing infrastructure optimization and dynamically moving workloads based on compute, storage and networking loads.  XenServer can even automatically place workloads based on historic data. The reporting functionality is particularly useful for administrators to understand overall systems health, as well as metrics such as system capacity.

Improvements in Networking, Storage and availability

The Distributed Virtual Switch Controller (DVSC), which relies on the Open Virtual Switch networking, has had its deprecation notice rescinded and the feature is brought up to date with new security patches.
A number of architectural updates have significantly increased networking performance, by as much as 800% in some cases, now with support for Generic Receive Offload (GRO), the ability to save dom0 kernel CPU resources and improved IPv6 guest performance. Grant Mapping has been increased 100% in aggregate throughput of multiple VMs. Its network performance improvements enable more VMs to run effectively per host. Storage performance has also been increased by over 100%, with support for in-memory read caching and tapdisk3, and reduced IOPS on storage networks